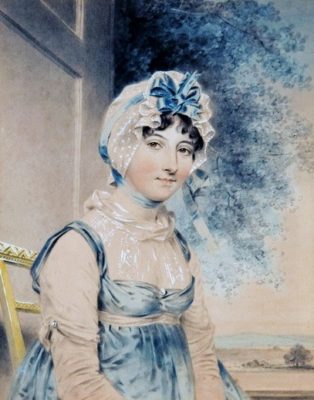 A celebration of the 250th anniversary of her birth.

Claire Connolly is Professor of Modern English at University College Cork in Ireland and, for 2018/19, Parnell Fellow in Irish Studies at Magdalene College, Cambridge. Her 2011 book A Cultural History of the Irish Novel, 1790-1829 won the Donald J. Murphy Prize for Distinguished First Monograph, awarded by the American Conference for Irish Studies. Scholarly editions include two volumes in The Works of Maria Edgeworth (Pickering and Chatto, 1999-2003) and Sydney Owenson’s The Wild Irish Girl(Pickering and Chatto, 2000). With Marjorie Howes (Boston College), she is General Editor of a new six volume series, Irish Literature in Transition, 1700-2015, under contract to Cambridge University Press. She is currently writing a book on Irish Romanticism for Cambridge UP.
Dr Eibhear Walshe is a senior lecturer in the School of Modern English at University College Cork where he is Director of Creative Writing. He has published in the area of memoir, literary criticism and biography, and his books include Kate O’Brien: A Writing Life, (2006), Oscar’s Shadow : Wilde and Ireland, (2012), and A Different Story: The Writings of Colm Tóibín (2013). His childhood memoir, Cissie’s Abattoir (2009) was broadcast on RTE’s Book on One.His novel, The Diary of Mary Traverswas shortlisted for the Kerry Group Novel of the Year Award 2015 and longlisted for the 2016 International Dublin Literary Award.

Three Around Edgeworthstown: Maria Edgeworth in the Irish Midlands

Maria Edgeworthgrew up on the frontier of Anglo-Ireland, amidst a landscape subject to repeated patterns of change and dislocation. The family estate was located in the fertile eastern and southern parts of County Longford but Edgeworth’s writing shows an awareness of the varied topography of the Irish midlands, determined by the relationship with Dublin to the east and bounded by the Shannon to the west. In Irish culture, the midlands are often written about in ways that suggest a lack of definition: as a corridor or boundary or place where edges meet. The lecture discusses the impact of this landscape on Edgeworth’s writing while also considering the ways in which she made Longford localities part of her ambitious vision of an enlightened society in which women would play a central part.

A THEATRICAL PORTRAIT OF MARIA EDGEWORTH.

Maria Edgeworth is Ireland’s greatest early modern novelist. Her novels outsold Jane Austen’s in her lifetime and inspired Sir Walter Scott, Turgenev and a host of lesser-known figures, literary and political. A member of the Anglo-Irish landowning class, she produced the most searing satire of abusive landlordism and its numerous abuses ever written in her first comic masterpiece, Castle Rackrent.
In subsequent writings the ‘tragic dance of these sister nations’ provided her with characters, themes and locales in which the tensions and affinities between Irish and English societies were dramatisedrepeatedly.
Never married, she first assisted her father and then went on to manage the family estate at Edgeworthstown, ultimately providing assistance to the local population during the Famine, at which point she was in her late seventies. She became an honorary member of the Royal Irish Academy, which up to that point had been an exclusively male institution.
She was an innovator in her life and in her work, which is sharp, funny and daring in its treatment of politics, class, race and gender. Her idiom is simple and conversational and ideal for performance.
This one-woman show, performed by Carmel O’Leary, draws on Edgeworth’s letters, diaries, novels and essays to create a multi-layered portrait of this complex genius and by extension of her life and her historical moment. Running at just under an hour, it can be performed in any large room or small theatre and is ideal for presentation at conferences, summer schools or events related either to Irish Studies or to Women’s Studies: it is easily understood by those for whom English is not a first language.
Commissioned by Creative Ireland as part of the celebrations marking the 250th anniversary of Maria Edgeworth’s birth, it will tour extensively over the next year to venues in Ireland and abroad.