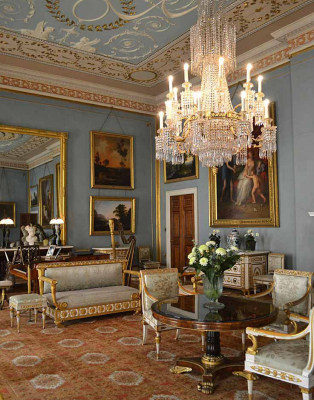 Programme:
Dr Peter Murray: ‘The Influence of Italy on taste in Irish country houses in the eighteenth century’.

Julian Walton: ‘The libraries of the Big Houses in Co. Waterford’.

Throughout the eighteenth century, the Grand Tour, where British and Irish travellers absorbed the influence of Classical European civilisation during sojourns on the Continent, played a significant role in the formation of Neo-Classical taste. This talk looks at the travels and experiences of philosopher George Berkeley, collector James Caulfeild, Earl of Charlemont and the Irish artist Robert Fagan, examining how they influenced the arts, not only in their home countries, but also in Italy itself.

Dr. Peter Murray is an art historian, writer and artist, living in West Cork. A former director of the Crawford Art Gallery, in June 2018 he was conferred with an honorary doctorate by UCC, for his contribution to the arts. He has written extensively for the Irish Arts Review and other publications, and was co-editor of Vol. V of the 2014 RIA/Yale

“The libraries of the Big Houses in Co. Waterford”.

The library was an important room in the Irish country house. An eighteenth-century gentleman was expected to be well versed in the ancient classics, so the texts of Greek and Latin authors were to be found in abundance, as were editions of the Bible, both in the original and in translations with learned commentaries. For lighter reading there were contemporary novels and works on history, geography, science, and travel.
Such books were frequently bought as paperbacks and then given special bindings which were often of great beauty, Dublin binders being highly regarded in the later Georgian period. Inscriptions and bookplates can often give us rare details of the various owners, while bibles often contain entries marking births, marriages and deaths.
During the nineteenth century the library progressed from being a formal reading-room to a place of general relaxation and entertainment, and the content of its shelves reflected the great increase in literacy, with the publishing of many novels by celebrated authors and books on sport.

This lecture discusses the furnishing and content of the libraries of Waterford’s country houses, both those that still exist and those that lasted down to recent times.

Julian Walton is a former secondary schoolteacher and librarian with a lifelong interest in Irish history and genealogy, particularly relating to County Waterford.  During the 1990s he worked at Waterford Heritage Genealogical Centre, where among other assignments he undertook the conservation of Waterford Cathedral Library.  He was then employed at the library of University College Cork in the cataloguing of older printed books.
Since he “retired” in 2006 he has been Resident Historian at Dunhill Multi-Education Centre in County Waterford, where he lectures on aspects of local history.  He is the author of The Royal Charters of Waterford and of many articles in historical journals, especially The Irish Genealogist and Decies, and is a former editor of both journals.  His most recent publications are On This Day volumes one and two, which comprise historical snippets based on a series which he presented on Waterford Local Radio between 1994 and 2012.
He is currently researching the history of Curraghmore with the assistance of Willie Fraher and Marianna Lorenc.  He is also an active member of the Bookplate Society.

A fit setting for ‘Persons of Noble Birth and Rank’ – Dromana’s sumptuous apartments.

The talk will look at the detailed 1755 inventory of Dromana, particularly at the richly decorated apartments enjoyed by Lord and Lady Grandison – their dressing rooms, bedroom, and other rooms that were carefully and expensively decorated and furnished.
It appeared that nothing but the best would be good enough to ‘make the grand figure’ including monogrammed silverware, expensive china for drinking tea, family portraits, and brass locks and keys with escutcheons for each door.

Dr Patricia McCarthy is an architectural historian and a graduate of Trinity College Dublin. She has published widely on 18th and early 19c subjects in a number of books and in publications such as the Irish Arts Review, Country Life and Irish Architectural and Decorative Studies. She is the author of ‘A favourite study’: building the King’s Inns (2006), and has contributed to two volumes of the Royal Irish Academy’s Art and Architecture of Ireland (2014). Her latest book, Life in the Country House in Georgian Ireland, was published by Yale University Press in 2016.

“The Stuccoed interior in Georgian Ireland”.
Decorative plasterwork (or stuccowork) is one of the most celebrated aspects of Ireland’s renowned eighteenth-century domestic architecture, and arguably the defining characteristic of the Georgian interior. This lecture will explore this rich heritage, with special reference to the foremost artists and architects of the age, and to key houses across the province of Munster, including Kilshannig and Riverstown in county Cork, and Curraghmore in county Waterford.

Dr. Conor Lucey is Assistant Professor in the School of Art History and Cultural Policy at University College Dublin. He has written widely on eighteenth-century domestic architecture and interior decoration, with a special focus on the contested relationship between design and production. His new book, Building Reputations: Architecture and the Artisan, 1750–1830, was published by Manchester University Press in 2018.